Thoughts on City and Suburbia while Painting and Priming 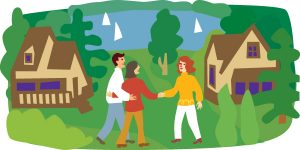 Notice the suburban setting. I tried to find photos of neighbors meeting in cities - nothing.

Reason for delayed post – I went home to Ohio to visit my parents and saw some old friends. I love going home. It’s a strange sensation to have lived in a place for 18 years, but only know it as driving around in my car with friends, hanging out at Commonwealth Park, or driving through BW. A lot has changed since I was 18, but every time I go back to Columbus it feels exactly the same as when I left.  While home I walked outside, watched a lot of HGTV and QVC, and realized that if I were to stay in Columbus the pressure of being married and having kids would be hard to escape. My father told me he would pay for J-Date, my cousin’s boyfriend said he might know someone in another city to fix me up with, and on it goes …. gotta love it. Well, I’m now back in New York  so that pressure is off 🙂

Random thoughts I’ve had since being back in New York – one in particular … I think lots of “live in New Yorkers” yearn for the suburban niceties – human interaction – physical contact. The other day I woke up early for a run and as I was walking back to my apartment I started saying, “good morning,” to everyone I ran into. Strange looks – head turns – and some people stopped, took out their ear phones. and said, “I’m sorry?” to then smile at my greeting and walk away.  I threw them all outside their little personal bubbles, reminding me of the commencement speech David Foster Wallace gave at Kenyon  in 2005. Quick bit of the commencement speech goes like this:

Surroundings. Most people don’t even know their neighbors. Interaction is all people crave, but for some reason this city closes people down. I’ve lived in my building for four years (granted I’ve been between Madrid and New York, but still) and I just met my across the hall neighbor, yesterday. We walked out of our apartments at the same time and she kept saying, “I’m sorry.” Then I said, “I actually wanted to speak with you because my gas meter is in your apartment.” Why it’s in her apartment I have no idea, but what I do know is that my electric bill has been estimated for more than two years. Painful. After we talked for ten minutes – I said, my name is Cynthia to which she responded with hers. Now I know that my neighbor is Anne. So when her boyfriend starts raging on his electric guitar – not realizing that although Jimi Hendrix could play, he maybe can’t – I can at least say, oh, it’s just Anne’s boyfriend. Anyhow – I digress.

Really, most of the strange things that happen in New York are often normal day-to-day bump ins in other places.  Sure I might know too much about all the people that live on my street in Columbus, but at least I know they exist instead of pretending I’m the only one who does.  Strange.

I’ve been thinking more about picking a handful of cities and staying a couple months in each one – to get a feel for how people live in other places. Always thinking that there might be a better setting that suits me then the city of NY. Or maybe it’s that I’m not ready to commit to one place yet … My therapist thinks I have an attachment problem 🙂 Also, am I the only one who doesn’t think Chelsea Handler is funny?

My Apartment: So … I got back to New York and threw a painting party. I took about eight trips to the paint store – became friends with the very knowledgeable staff, who gave me free hats for the party, and set out to transform my old dingy walls into fresh inspiring surroundings. With the help of my amazing friends – we painted the living room and started in on the kitchen. Yesterday, from 1 p.m. to 7 p.m. it was paint fumes, lox and bagels, converting brush colors, and asking the age old painting party question  – “where’s the tape?” I woke up this morning excited for the light to shine in, but, well, its been raining all day. But I have to say my apartment looks phenomenal! It’s amazing what a fresh coat of paint can do. Pictures of the new walls are in the works – first I have to go buy some lamps because I have no light in my apartment to see the new walls 🙂