The Art of Tearing Down a Bookshelf

Random:
Walked down the street the other day and ran into the guy who I met in my apartment. Accidentally spilled red wine all over my friend I’s pants … ruined them. I’ve run into five objects today in my apartment. Have to check the eggs in my refrigerator to make sure I won’t get salmonella. Last night “I” told me I was obsessed with bed bugs being in New York movie theaters – this was after the wine incident. I miss my kitchen in Madrid.
Personal Life:
The other night I dragged a friend and her sister  to a singles networking event. I had never been to a singles event, let alone a networking event, but since I’m on this new kick – take advantage of New York – well, you get the picture. It’s funny how I’ve never actually explored New York City. You  would think I’d know it like my abc’s, but, I don’t. I know Madrid better than I know New York – which is why I guess coming back to NY this time feels more like an adventure. A place to explore.

Anyhow – there were many people with nametags at this event. Everyone standing around waiting to be talked to or waiting to find someone to talk to. Quick tip: if you decide to go to one of these things and you really do want to meet people – you should go alone. Anyhow – we did the circuit. I left C for a second to get a drink at the bar with her sister, K, and by the time we got back she was already chatting it up with someone. They talked the whole three hours we were there. K and I circled, talked and met people …. found out that some people go to these events all the time (they had pre-made nametags) Even heard that if you go to morning events they’re better because people aren’t drinking. Not sure if who told me this was implying I had too much to drink … I’ve decided he didn’t know what he was talking about. I had made some off the cuff remark-  well how many times do you have the coffee conversation at morning networking events. You know the “oh, my gosh. I haven’t had any coffee yet this morning,” or ” wow, I need my morning coffee. I can’t function without it.” He  answered by saying, well, people like coffee. Right. Then I made a reference to Arsenio Hall. He didn’t grab it. That was enough networking for me.  Was the evening successful? Contacts = 2 / Dating Prospects = 0.

Apartment:
As is always the case when I get back from Madrid I go through a period of trying to figure out how I’m going to live a European lifestyle here in the U.S.  First on my list …. SPACE.

As mentioned in the previous post I live in a rent controlled apartment downtown. Lucky … yes … but … it has its drawbacks. I won’t go into them here because I don’t want to sound ungrateful, but my living space is a bit overwhelming. Walking to one side of the room means hitting something else. So what I want is to open the space up – feel like I have room to think, breathe, and have drinks with friends.

So the first move, which I took yesterday was to get rid of everything that a) wasn’t mine and b) cluttered my world. If I can walk into my living space and want to stay in it for more than five minutes, well, then I’ve accomplished something. Below I documented the process for everyone to see. I spent the day knocking down an old yellow bookshelf, moving my now dark/originally white Jennifer Convertible sofabad to one wall, and my grandfathers brown seventies coffee table that I can’t get rid of to the other wall, and, oh, piling everything in my kitchen so that I could see what I have. So things are starting to take shape and I’m realizing that there is space in this apartment. It’s just been hidden by all this c**p I’ve been saving since my mid twenties. Seriously. I just found all my rejection letters from my first book. Now why in the world would I want to hang onto those ….. negative energy all the way across. 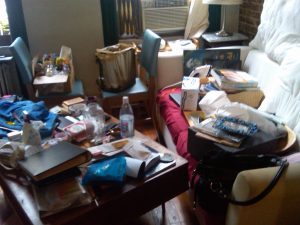 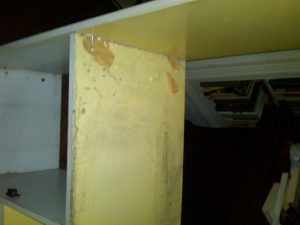 Minutes of pounding. Finally I can see the nails! 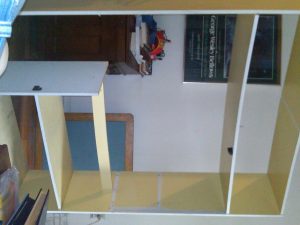 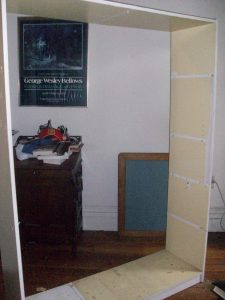 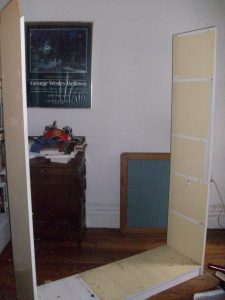 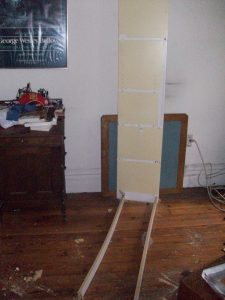 I said this was a process, right? 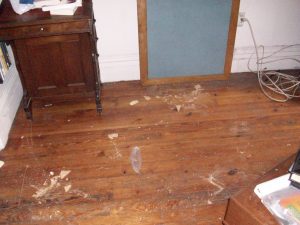 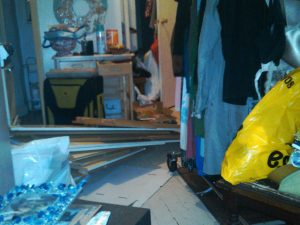 Where my bookshelf rests now ...