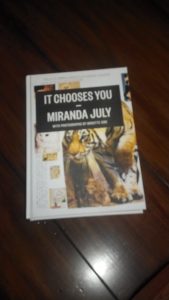 Last night I ran over to BookCourt  to catch one of the readings on tap. Almost every night the bookstore has events, for free!

I knew I was running late, but I wasn’t prepared for the packed crowd overflowing out into the Young Adult and Mystery sections. I stood in the back, unable to see who some might think, and they’d be right, a tall Miranda July. I felt like a JuJuBe, stuck next to my neighbor, and sticky. I looked around: why did all these people come to see her read; what was it about her that people connected with? Was it her as an artist, author, actor … Or was it they’d heard of her before and wanted to check her out in the real world.

Seeing authors in the real world, or what I’m calling the real world because it’s my world, is strange. It’s rare that the author as a person is as interesting as what they write about, or at least it often feels that way with fiction.  So I wasn’t too upset when the tallest flannel shirt guy in America happened to stand in front of me, because sometimes you don’t need to see to listen. But then why was I there, sweating, when I could have been in my apartment maybe catching her on NPR while I sipped a glass of wine.

I looked down, noticing the shoes of others. What was it that we were here for, standing for an hour for. Everyone laughed on cue , quieted at others, and when I looked around I could see people in their own worlds – absorbing her words / characters. Everyone was having an individual experience in a shared space, and most people, like me, came alone and couldn’t even see.

When she finished reading there was a Q&A. The questions were light and lame. As people started to clear out I thought maybe I would get a glimpse of who I came there to see … not the voice, but an actual being. I bought a book and waited in line, and waited in line, and waited in line. For a half-an-hour I patiently inched closer and closer. It was a line I could not fathom leaving because I had already been waiting in it so long that to leave would be disastrous, a failed mission. What was so important about having Miranda July sign her book. She’s a great every kind of artist, but I don’t collect her work. I waited. How weird the concept of an autograph. How many people were even in this line. Her hand must be tired from signing everyone’s books. How odd it must be to come face to face with your audience –  the people that make you Miranda July.

I walked up and handed her my book that she wrote. She removed the post-it- note with my name on it (I guess it makes the signing process easier / faster). Afterward, she said, have a good night and looked at me, directly at me. She had no idea who I was, but I knew her, or at least her in letters. But in the direct eye contact moment I felt like I could possibly know her, or that maybe at one time if we weren’t who we were we could’ve been friends. To be seen by someone who  you want to be seen by: that’s why the line took so long, why people didn’t leave but rocked side-to-side to relieve their foot pain during the reading. All people want is to be seen, and for a moment to be known by someone who is.

I opened the front cover to the generic note she wrote to everyone. The moment of I see you was gone.