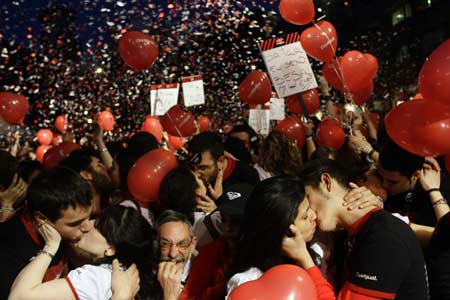 (By the way, this photo was taken from Madrid’s mass kissing event held in 2008)

The weather is definitely affecting the young and old in Madrid. Not only are people strolling la ciudad in numbers, enjoying the terrazas, but also kissing at every pause in their step.

If you aren’t interested in displaying your affection for your loved one, well, then don’t come to Madrid. It’s here that lovers show they love each other – every second, minute, hour of the day. You can try and pretend not to notice lovers stopped in the middle of the street, unaware of the world around them,  or try not to glance over at the couple laying on the ground – rolling around, but, really, it’s unavoidable.

Some find it gross, disgusting even. And I won’t lie, when I first got here I thought it was incredibly weird. Never in New York had I seen crowds of people showing their love for one another. But the more time I’ve been here, the more normal it seems to see fifty years olds rolling around in the park, or late twenty-somethings up against the gates outside the Palacio Real.

Okay – there are lots of things at play here. I could say that it’s so common because people aren’t ashamed to show their affection for their person in public, or that people here are more liberal, but when it comes to the young none of the above really is the reason. For the young, it’s really because they have no other place to go. Because most Spaniards live at home until they get married – the only place they can be with their lover is in the open. For the old – it’s not that they don’t have a place to go, but by the time they’re fifty it’s so normal for them to show affection outside the home that it’s only natural for it to continue.

And although at first I thought it was disgusting to watch people making out everywhere, now, I kind of thing it’s this wonderful thing. I imagine that it could bring a lot of healing to those couples who’s love lives have vanished and who come to vacation here. Falling into the Since everyone else is doing it, why don’t we kind of sentiment. And then I imagine that feeling stays with them when they get back to their homes and they are more affectionate than before.

When I sit in el Retiro and I see older couples rolling around like they’re fifteen, I can’t help but think how different a day in Central Park is. Most older couples are walking, rarely sitting on the grass. Couples who are enjoying the ground are with books, ipods, and friends. Okay – sure I’m generalizing here, but it’s true that in five years I can only remember one or two times where I’ve seen couples openly loving each other in New York.

Sure it gets annoying to constantly see love in your face, especially if you aren’t in a relationship, but there’s something beautiful when I see older couples together like this. It’s a reminder that love and relationships can be however you want them to be – and it’s possible to have a future that feels more like a glass of champagne than a fine wine.

As a friend and I said yesterday – go ahead Madrid – suck face!