How Much Have You Grown? 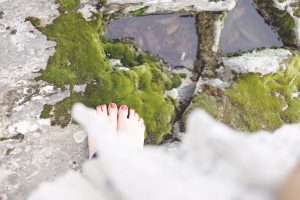 I’ve been thinking a lot about what I wish I hadn’t been so afraid of when I was younger. And by asking myself this one question what I’ve found is how much I’ve grown over the years.

Sometimes we focus so much on what to be and how to be better, more, that we don’t take the time to see how much we’ve grown over the years. By looking back at the difficult moments we give ourselves an opportunity to see how strong we are; how capable we are of living through life. By opening up about what we were afraid of then we shed light on our strengths now.

When I look back these are the things I wish I hadn’t been afraid of:


My Feelings You know when a friend asks you to do something you don’t want to do, or you agree to take on another responsibility even though you know inside it will only add stress and overwhelm? Well, when I was younger I was the queen of saying yes when I wanted to say no and playing things off like they didn’t matter when they did.  Most of my time was spent disregarding my feelings, because I thought everyone else’s needs mattered more than my own.  And the more I cast aside my own wants and needs the more I perpetuated the feeling that what I felt and what I needed wasn’t important.

I wish I hadn’t been afraid to live inline with how I felt, because by doing so I would have avoided so much chaos and confusion, resentment, and an overall feeling of obligation.

My Strengths Growing up I always compared myself to everyone. I wasn’t as smart. I wasn’t as pretty. I wasn’t as athletic. I wasn’t as talented. I focused so much on what I wasn’t that I never gave much thought to what I was. For a long time I believed I was supposed to be better – to take what I was weak at and improve. But if I had focused on my strengths instead, enhancing what I was already good at, well, then I’d have had something other than what I wasn’t to believe in.

My Body Blame it on the magazines, televisions shows, our culture, but even as a sixth grader I was under the impression that I was fat. And being fat wasn’t good. For the record, I wasn’t fat, but when a group of twelve-year-old boys make loud crashing noises as you walk by and snicker that you are it’s hard not to believe them. If I hadn’t been afraid of my body I would’ve said something to those boys; I wouldn’t have taken diet pills, slim fast, over exercised, gone on a rice diet or bad mouthed myself every minute I got.  I wish I had believed in my body, seen it for the miraculous wonder that it is; seen my legs as a way to walk, my arms as a way to hug, and my lady parts as sexy. If I wouldn’t have been afraid of my body I would have learned to accept myself much earlier than I did.

What I Didn’t Know When I was younger I was under the impression that I was supposed to know everything. And that if I didn’t know that it was better to pretend I did than to admit I didn’t. If I would’ve let myself admit to not knowing I would have learned so much more. I would have let myself become curious and investigate – it would have turned the world into something to explore instead of something to master.

I don’t know if I went back and did it all over again with what I know now my life would be “better”, but I do know that having overcome these fears of my youth I’ve grown a heck of a lot.

What about for you? What are some of the things you wish you hadn’t been scared of? By remembering those moments you’re seeing first hand how you’ve overcome those fears or what may still be holding you back.