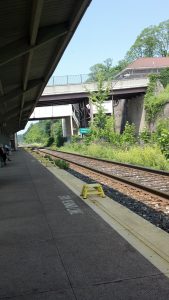 Growing up, I imagined taking a machete and clearing what in my mind was bush but was really suburban shrubs to forge my own path. I envisioned breaking off from the pack, because so often I was told that it was better not to draw in the lines. Although I had no concept of what those phrases really meant, I knew from a young age that existing outside of the norm was feared by some and applauded by others.

I remember when I was just out of college and working as a file clerk in a lawfirm in NYC. I was outside the building, in my Ann Taylor slacks and button down shirt, talking to my father. I was going on about how I didn’t know what I was doing in my life and how I wasn’t anywhere near where I thought I would be. How was I going to accomplish all that I wanted to if I was in a basement filing bills. What my dad said was “It’s not always a straight line that takes you to where you’re going. You’ll have detours and pit stops, but you’ll get there.”

For so long I was fighting to get through the crapola, because I didn’t believe in detours, because I was impatient and wanted to get there, now. When some instance would arise that pushed me in another direction, like a delay in a flight or  I didn’t get the job I wanted or I received another rejection letter in the mail, I would fight against it. I would get angry, annoyed, cop an attitude.  So many times my friends and I would commiserate with one another, securing each others pain and hostility. While we thought we were being supportive, we actually were perpetuating the problem.  So what happened?

I had to make a shift. I had to finally leave the pack of stories that were full of lack so that when I was pushed in another direction I could accept it. So that when last weekend my flight was canceled and I was stuck in Charlotte, NC, I didn’t start kicking things, screaming invectives, or when the conveyor belt broke with our luggage and then the plane sat on the runway  for an hour  I didn’t huff and puff. Instead, I laughed. I laughed because the curves and pit stops are the reminders in life that I’m alive.

So how will you choose to react to your detours? Will you freak out and get mean, or will you throw your arms up and laugh at the crazy lot of it? The next time something doesn’t go your way, see it as a setup for something better to come, see it as an opportunity to laugh. It’s not easy to break off from the pack, so I dare you to try it.