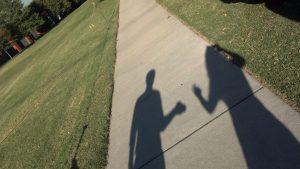 Middle School:
I remember being on the phone in middle school for hours, talking about anything and everything. From the upcoming school dance to zits, to what so and so said to me the other day in class, it was like exploring uncharted waters to find safety. Then when three-way calling became the next best thing, phone conversations took on the role of a lie detector test. Anytime a friend called and asked me a question, I never knew how to answer, because god forbid the person they were asking about was on the other line. This was especially difficult when it came to boys. “Do you like Michael?” “I don’t know, yes.” Laughter ensued and suddenly, “Cyn, Michael’s on the line.”

High school:
By the time I got to high school, three-way calling about boys was out and talking with actual boys was in. This was when I would be on the phone for hours asking maybe hundreds of questions to understand the life of a boy I was talking with. I wanted to know everything about him, so much that sometimes I would give  quizzes from Seventeen magazine just to see where he stood on important things like: kissing and crush worthiness. I remember the first time I fell asleep on the phone with a boy; it was amazing to feel so close to someone like that.

Phoning friends was also really important. It was almost like if I wasn’t listening to someone talk than I was missing out on an experience I would later want to have.

College:
When I got to college, phones weren’t really a part of the equation to getting to know someone anymore. There were phones in the dorm rooms, and cell phones were just moving out of the “in case of emergency” realm and into daily life. Overall, people communicated by being in each others presence. If I wanted to chat with someone I’d stop by a room and hang out. It was liberating to live within walking distance to people that in high school I’d have to call to chat, but here, well, I could talk to someone in person whenever I wanted to.

I had access to people. Instead of calling to see about catching up with someone later in the day I would leave a note on a car or a door, or maybe I would run into them on the path to the cafeteria. Then instead of a phone call we would talk face-to-face. This was when conversations started to change for me. Talking in middle school and high school was really about experiencing what I didn’t know because I had never been through any of it before, but when I got to college conversations became more about learning than experiencing. I talked with people about ideas, history, and the impact of x on y, social issues, and really asking questions about life and relationships, human interaction. Conversations became a way to learn more about the world I lived in from the people in my life.

After College:
Face-to-face time gets pushed to the backseat and the cell phone gets shotgun. Everyone is now scattered, living in different areas of the same city or the world. It goes back to how it was in middle and high school, the only difference is now the phone is no longer a conduit for discussion but it is how to exchange information. I can’t forget to mention the computer, because this is really when e-mail becomes more like the old phone conversations I used to have. Because e-mail is now the new phone conversation, texting becomes the notes you’d leave on doors and cars.

Today:
I have these modes of communication and I use them all throughout the day.  Then I meet up with the people I’m communicating with during the day at a bar at night. Once again the conversation has changed. Whereas in middle and high school it’s about experience and in college it’s about learning, now, today, I’m trying to understand the point of conversation at all.

It feels like when I meet up with people there’s nothing mindful about it. To put it bluntly, I’m not really sure why I’m meeting up with them. Almost like there’s nothing to talk about anymore. Or if it’s talking, it’s the same conversation over and over again. Everybody goes to work and then meets at a bar, and because I’ve already talked with these people multiple times during the day what is there to talk about now? Do people have anything more to talk about?

I think about how much wasted time it is to go and sit at a bar and talk about things I already know, and then I think about the reasons I’m there at all. Am I there because I don’t want to be alone with my thoughts? There’s so much talk about self-medicating with television and alcohol, but what about talking? I know people who chat during the day, post to Facebook, Skype, and then afterwards text and talk, then meet up for dinner and go home and fall asleep to Netflix. Not once are they alone with themselves for one minute during the day.

So there are a couple elements being juggled here, but one ball that I just thought of is communicating with the self.  All this time, I’ve been looking at communication with others, but what about with me? If I’m feeling like I’m no longer experiencing or learning through conversations with others, what is it about me that’s changing and what kinds of conversations do I want to be a part of. How do I want to communicate? I start thinking more about this idea of being mindful and respecting my interest in communicating and talking in general.  Because the more I go on without thinking about it, the less I respect the act itself.

I want to choose who I talk with and what I say to them. I think that’s why I’ve never known how to deal with people who retell the same story to me over and over. At first, I thinking about how to let the person know they’ve already told me this story, and then I wonder, wow, if they’ve told me this story four times that means they’ve likely told other people the same story as well. What makes this special for me to hear? Is everything they’re saying something they’ve already said to somebody else? What about this conversation right now is customized?

For the last month or two I’ve changed my hanging out and talking habits, and have noticed a big difference in the way I communicate. Being more mindful of what kinds of conversations I want to be a part of and customizing my approach has helped me to remember it’s purpose.

The six tools of mindful speech in Buddhism: