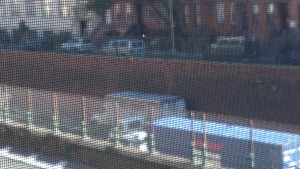 I live by the BQE and my apartment shakes every now and then. I’ve had to move my bowls around so I don’t hear them clink together. When the large trucks pass and my building begins to tremble, I have moments where I think the building may possibly collapse. But mostly the rattling calms me. Calms me because it reminds me now and again that nothing is as stable as it may seem.

Looking out my window onto the highway I’m amazed that there’s never a dull moment. No matter the hour there are cars and trucks all on there way to somewhere. It’s quieter in the mornings because there’s more traffic, at night the cars speed down the lanes, which means for as long as I’m here I’ll never have to purchase a white noise machine.

So many cars. So many people. If I let myself, I could get lost in the conversations I imagine people to be having, the radio stations the truck drivers are listening to, the mental state of each driver or passenger. Watching cars move … I see now why my grandmother found it so intoxicating. She used to sit on the bench outside her apartment complex in Bexley, Ohio and watch the cars, but also count the amount of red or white vehicles. I’d sit next to her and she’d comment on the flow of traffic. “They move so effortlessly, one after the other.”

My grandmother started watching cars after her stroke. I started watching cars while sitting at my desk. For her, maybe it was because she could no longer move around like she once did, and the movement of the cars made her feel like she too was going somewhere. For me, it was the opposite, all I wanted was to stop for a moment and get lost in motion that wasn’t mine.